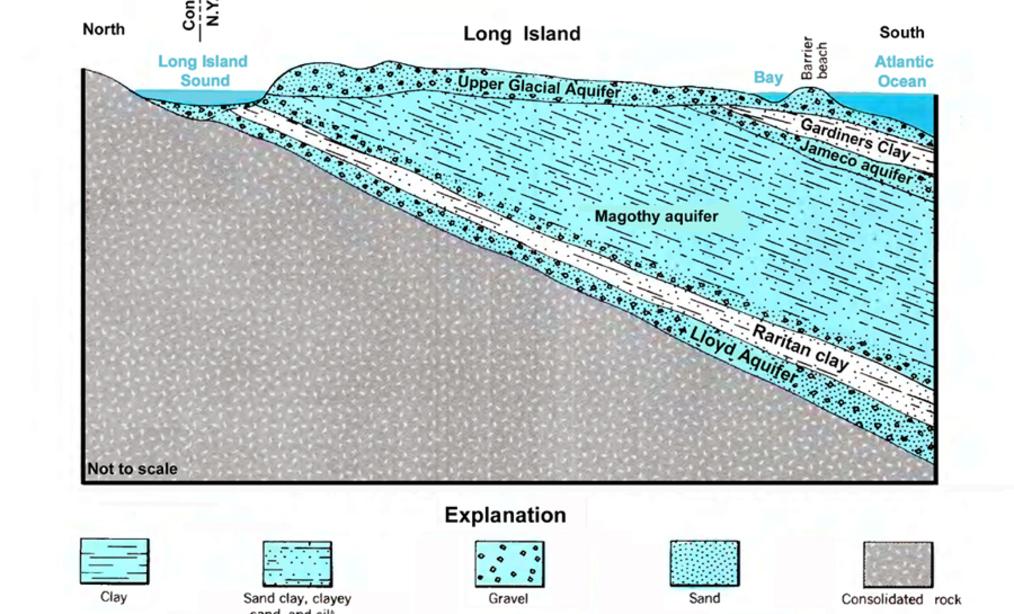 1.  Upper Glacial Aquifer: It is the youngest formation and is approximately 10,000 years old.  The age of the water in the aquifer can range from less than one year to as much as 25 - 50  years old.  The water in this aquifer is the first to be affected by activities on the land surface.  Pollutants on the land can be be dissolved in rain water that migrates slowly through the soil until it reaches the water table.  Approximately 21% of all water on Long Island is withdrawn from the Upper Glacial.

3.  The Lloyd Aquifer:  The formation is approximately 70 - 144 million years old.  The age of the water in the Lloyd may be as much as 2,000  years old on the north shore to  8,000 years old beneath the south shore of Long Island. The water in the Lloyd along the north shore is not as old since the time of travel from recharge to discharge is shorter.  The Lloyd aquifer holds about 3% of all the water in the aquifer system and receives about 9% of all recharge. The Lloyd aquifer is the only true confined aquifer.  It is separated from the Magothy by a thick clay layer known as the Raritan Clay.  This clay bed is not an aquifer but a confining layer that retards groundwater flow from the Magothy to the Lloyd.  It can take 500 to 1,000 years for water to flow into the Lloyd, across the Raritan Clay.

Of the 44-46 inches of average rain per year on Long Island, only 50% becomes recharge to the aquifers.  Water recharge moves from the Upper Glacial, to the Magothy and ultimately into the Lloyd Aquifer.  The rate of groundwater flow through the aquifer system decreases with depth.  Sixty-two percent (62%) of the water that enters the Glacial Aquifer does not recharge the rest of the groundwater system.  Thirty-eight percent (38%) of water from the Glacial Aquifer moves down into the Magothy Aquifer as recharge.  Only three percent (3 %) of the water in the Magothy eventually migrates deeper and reaches the Lloyd Aquifer. Groundwater moves more easily along lateral flow paths than it does vertically.   The recharge zone into the Magothy Aquifer is in the middle of the island and is about 5.4 miles wide. The recharge area for the Lloyd Aquifer is only about 0.5 miles wide.  The width of these recharge areas can change depending on the amount of groundwater in storage and the amount of precipitation reaching the aquifers.